HANNOVER. GERMANY. With North American Class 6-8 truck sales already off 10% compared to 2015, they could fall by as much as 15% for the entire year, according to Wolfgang Bernhard, head of Daimler Trucks. “We see a real slowdown for the end of the year in the U.S.,” he said at a press conference during the IAA 2016 commercial vehicle show.

The system is designed to be quiet in operation and is fully integrated into the engine's overhead design. It can assist with exhaust aftertreatment thermal management by preventing the catalyst from cooling during descents.

By increasing engine braking performance at lower engine speeds the HPD Engine Brake can improve thermal management and match industry trends toward downspeeding and downsizing engines, according to Jacobs.

Engine braking performance is becoming increasingly important because key strategies for improving fuel efficiency include reducing the natural slowing of the vehicle caused by wind resistance, engine, drivetrain, and rolling resistance from the tires, says Jacobs.

Jacobs' HPD Engine Brake transforms the four-stroke engine into a two-stroke compression device by deactivating the main intake and exhaust valve events and supplementing with two-stroke valve events. Whereas a conventional engine brake has one compression release and one brake gas recirculation event per cam rotation, this innovative and patented two-stroke technology achieves two braking events per cam rotation. It is fully variable with controlled boost modulation, which allows the driver to achieve the right balance between retardation, speed and efficiency.

“The majority of European trucks still use hydraulic driveline retarders, which are dependent on vehicle speed for effectiveness, and are typically 175 kg heavier, with a corresponding penalty for the vehicle's payload capacity,” said Sergio Sgarbi, Jacobs Vehicle Systems president. “The Jacobs HPD Engine ...Read the rest of this story 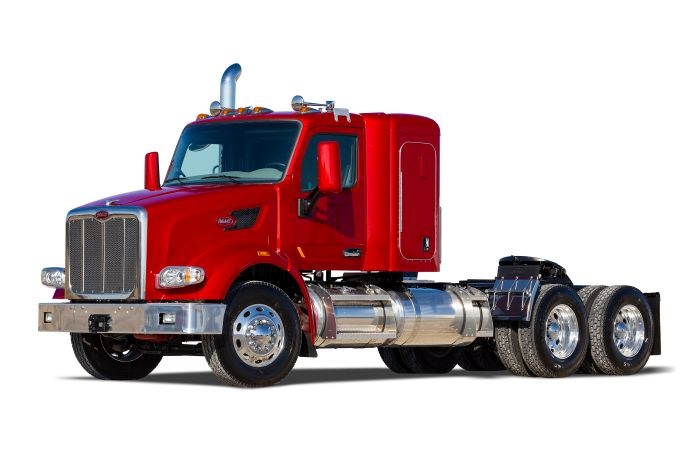 Peterbilt has announced that its no-idle fuel-fired heater is now available for Model 579s and 567s equipped with 44-inch sleepers.

With these latest additions, the system can be spec'd with the full range of Peterbilt sleepers including the 44-, 58-, 72- and 80-inch versions.

The fuel-fired sleeper heater system includes an under-bunk heater, fan-powered circulation and a digital control panel that is mounted in the sleeper.

The truck, capable of driving itself, features several driver assistance systems for emergency maneuvering and braking as well as lane keeping.

Greater safety and improved efficiency through automated driving are mobility “megatrends” that are in the view of one global OEM “increasingly relevant” to the commercial vehicle industry.

Looking to add video to your trucks? 4 tips to help choose

Fleets have lots of choices when it comes to adding a video system, and plenty of reasons to want to spring for the technology. Here's four tips from SmartDrive as you review options and decide on a video product.