The American Trucking Associations has named four executives to new senior leadership positions, according to the federation's new president and CEO, Chris Spears, as part of an "ongoing transition."

The new members of ATA's senior leadership team are:

“ATA is embarking on a transition and driving in a new direction, one I am proud to lead and prouder still to have these fine individuals and all the ATA staff play a part in,” said Spear. “We share the vision and goal of ensuring this essential industry continues to prosper and safely move our country forward.”

Barna, who has already begun working in her new role ,has been with ATA for 20 years, most recently serving as senior vice president of communications and public affairs. She also spent 8 years at the Motor Freight Carriers Association.

Hall will take up her new position on Sept. 3. She previously was general counsel and deputy staff director of the House Transportation and Infrastructure Committee. Hall also has experience in the executive branch of government, including at the Department of Homeland Security ,and in the private sector.

Hensley will start her new position on Aug. 15 and was most recently was senior vice president for public affairs and communications. She has also served as Deputy Assistant Secretary for Public Affairs at the Department of Labor; Associate Administrator of the Small Business Administration; and as House and Senate communications director for former Senator Tim Hutchinson (R-Ark).

Sullivan's first day at ATA will be on Aug. 15 as well. She joins ATA after serving as legislative director for Sen. Richard Shelby (R-Ala) and had previously held positions with the Department of Justice and on the staff of Sen. Lamar Alexander (R-Tenn.)

Spear, a former ATA senior vice president of legislative affairs, took over the top post at ATA on July 9. He succeeded Gov. Bill Graves, who is retiring after more than 13 years at the helm of trucking's biggest lobby.

Along with his prior tenure at ATA, Spear over the course of his career has served as a Capitol Hill staffer and in federal agencies as well as in the private sector. He most recently held the position of vice president of government affairs at Hyundai Motor Company.

“As ATA forges this new path forward, we are lucky to have quality leaders like Elisabeth, Jennifer, Sue and Bill join our already tremendous professional staff,” said Pat Thomas, ATA chairman and senior vice president for state government affairs at UPS. “On behalf of the members of ATA, I'd like to congratulate all of them and wish them nothing but success in their new roles.”

ATA stated that it will make additional leadership appointments in the coming weeks as the federation continues to transition under Spear's leadership.

[Business Wire] - J.B. Hunt Transport Services, Inc. announced today that its Board of Directors has declared the regular quarterly dividend on its common stock of $ 0.22 per common share, payable to stockholders of record on August 5, 2016.
Trucking News
21 Jul by Vitaliy Dadalyan Tags: American Freight Trucking 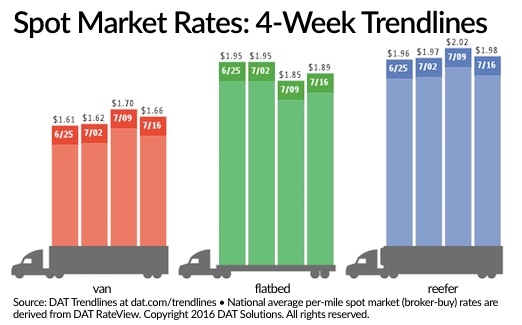 Spot truckload freight rates switched patterns over the past week, following seasonal highs hit by vans and reefers and a decline in flatbeds, as overall cargo volume was lower than anticipated, according to DAT Solutions and its network of load boards..

The number of available loads rose just 7% for the week ending July 16, well below the 20% expected rise following the holiday-shortened week before.

This happened as truck posts on the DAT network increased 37% week-over-week causing load-to truck ratios to drop for all equipment types. Vans fell 26% to 2.6 available loads per truck while reefers dropped a little more, 27%, to 4.7 loads per truck. Flatbeds posted the smallest decline 14%, putting the load-to-truck radio at 13.4 to 1

The number of van-load posts gained 3% and truck posts rose 38% as outbound van rates declined in major markets. The highest outbound regional rates all posted declines over the past week, falling between 2 cents and 8 cents per mile.

The one bright spot was Memphis, where rates held steady at an average of $1.94 mile. Also the Memphis-Columbus lane jumped 15 cents to $2.03 per mile. That lane is associated with retail freight so this could be a sign of good things to come, according to DAT.

The number of reefer load posts dropped 4% while truck posts increased 32% for the week. Again, load activity was below expectations.

Rates fell in major regional markets in the Southeast and West. The average outbound rate from Los Angeles declined 9 cents to $2.58 per mile while Sacramento, Ontario, Fresno, and Twin Falls all had lower rates.

On the Mexican border, the average outbound rate from McAllen, Texas, gained 7 cents to $1.82 per mile and edged up on most high-volume lanes. Nogales, Ariz., fell 15 cents per mile with the Nogales-Los Angeles lane plunging 39 cents to $1.67 per mile.

Flatbed load availability added 18% and capacity increased 37%, leading to somewhat of a surprise that the average rate increased rather than fell in the sector over the past week.

MAUMEE, OH – What's in a name? Something that reflects the way a company conducts business. So says Dana Holding Corporation, which plans to change its name to Dana Incorporated on August 1.
Trucking News
21 Jul by Vitaliy Dadalyan Tags: American Freight Trucking

Giuliani speech you didn’t hear: Not just your IT security, it’s your connections

Right after speaking at the Republican National Convention, former New York City Mayor Rudy Giuliani found another appearance important enough to catch a night flight to before heading straight back to Cleveland: the BlackBerry Security Summit, where he talked business cybersecurity risk.

It's been an interesting news week on the autonomous commercial vehicle front.

Tesla founder Elon Musk, apparently unfazed by the recent fatal crash involving one of its cars on a beta-test “autopilot” mode and a tractor-trailer (or perhaps wanting to provide a distraction from the bad press), revealed a “master plan” that includes trucks, buses and ride sharing.

In a blog posted on the automaker's website, he says heavy-duty electric trucks are in the early stages of development and should be ready for unveiling next year.

“We believe the Tesla Semi will deliver a substantial reduction in the cost of cargo transport, while increasing safety and making it really fun to operate.”

He also writes that “as the technology matures, all Tesla vehicles will have the hardware necessary to be fully self-driving with fail-operational capability.”

He cautions, however, that autonomy is still in its early stages.

“It is important to emphasize that refinement and validation of the software will take much longer than putting in place the cameras, radar, sonar and computing hardware … Even once the software is highly refined and far better than the average human driver, there will still be a significant time gap, varying widely by jurisdiction, before true self-driving is approved by regulators.”

Musk said he expects it will take some 6 billion miles of experience with this technology before you see worldwide regulatory approval. Currently we're accumulating that experience at just over 3 million miles a day, he noted.

So why is Tesla deploying partial autonomy now?

“The most important reason is that, when used correctly, it is already significantly safer than a person driving by themselves, and it would therefore be morally reprehensible to delay release simply for fear of bad press or some mercantile calculation of legal liability.

“According to the recently released 2015 NHTSA report, automotive fatalities increased by 8% to one death every 89 million miles. Autopilot miles will soon exceed twice that number and the system gets better every day. It would no more make sense to disable Tesla's Autopilot, as some have called for, than it would to disable autopilot in aircraft, after which our system is named." 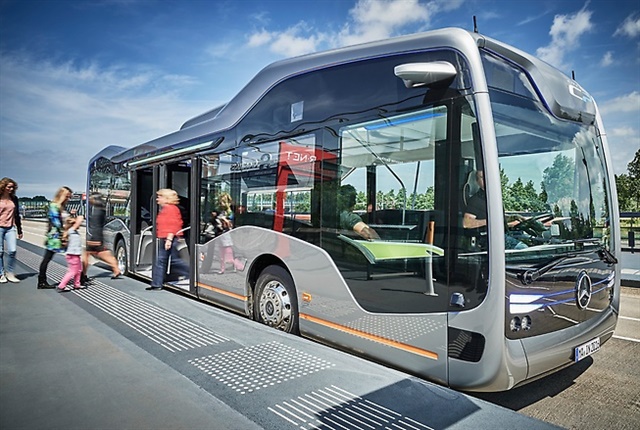 On the other side of the Atlantic, Daimler, after testing autonomous technology on commercial trucks in Europe and the U.S. with HighwayPilot, unveiled a semi-automated city bus with CityPilot, touting it as the face of urban public transport of the future.

The technology of the CityPilot in the Mercedes-Benz Future Bus is based on that of the autonomously driving Mercedes-Benz Actros truck with Highway Pilot presented two years ago. It has however undergone substantial further development specifically for use in a city bus. It can recognize traffic lights, communicate with them and safely negotiate junctions controlled by them. It can also recognize obstacles, especially pedestrians on the road, and brake autonomously. It approaches bus stops automatically, where it opens and closes its doors.

Just under a dozen cameras scan the road and surroundings, while long and short-range radar systems constantly monitor the route ahead. There is also a GPS system. All the data received create an extremely precise picture and allow the bus to be positioned to within centimeters. The world premiere of the CityPilot took the bus on an exacting route covering almost 20 km, with a number of tight bends, tunnels, numerous bus stops, and high speeds for a city bus.

Meanwhile, Transportation Secretary Anthony Foxx told an industry conference that the Department of Transportation will issue guidelines this summer on self-driving cars. I'm assuming that these guidelines will either also cover autonomous trucks, or that they will provide a framework for separate guidelines for commercial vehicles.

"We want people who start a trip to finish it," Foxx said, according to published reports, speaking at the fifth annual Automated Vehicle Symposium in San Francisco.

While the DOT has been working with companies that are developing automated vehicles to adapt existing safety rules to these new technology, Foxx said those existing rules are not enough.

According to the Los Angeles Times, Foxx hinted that those guidelines would involve "pre-market approval steps" for autonomous car technology. But, the paper said, he also emphasized the approach would be flexible, with input from businesses, drivers and technology experts.

"We need clear lines of responsibility between industry, government and consumers," he said.

Foxx acknowledged that “autonomous vehicles are coming,” whether the world is “ready or not,” reported Fortune.com, which also quoted him as saying:

“We don't want to replace crashes with human factors with large numbers of crashes caused by systems." While there are many reasons why the industry is moving toward autonomous vehicles, he said, “if safety isn't at the very top of the list, we're not going to get very far.”

PALO ALTO, CA – Tesla Motors CEO Elon Musk is turning his sights to commercial vehicles, unveiling a “master plan” for the company that includes producing a new Tesla Semi. “In addition to consumer vehicles, there are two other types of electric vehicle needed: heavy-duty trucks and high passenger-density urban transport,” he writes in the plan that was unveiled last night. “Both are in the early stages of development at Tesla and should be ready for unveiling next year. We believe the Tesla Semi will deliver a substantial reduction in the cost of cargo transport, while increasing safety and making it really fun to operate.”