Purolator names 2015 Carriers of the Year

Caroline Lyle, a marketing and business development executive with extensive transportation industry experience, has been appointed vice president of marketing for TMW Systems, the company announced.

Continental OTR products to return to the Americas

FORT MILL, S.C, — Continental is bringing back Off The Road sales and product liines to the Americas markets starting August 2016, the company announced recently. This will be the first time Continental has entered the Americas OTR markets in…
Trucking News
3 Aug by Tags: American Freight Trucking

How Did Canadian National’s Intermodal Volumes Stand up to CP’s? 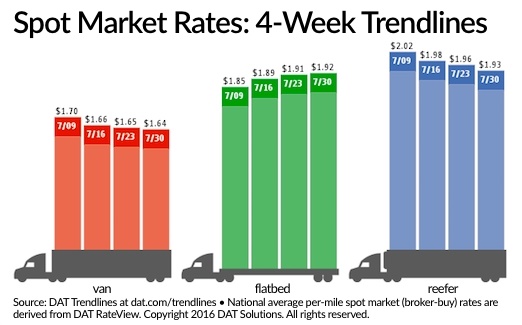 The number of available loads on the spot truckload freight market increased 3.5% during the week ending July 30, sending load-to-truck ratios higher at the close of July, but only flatbed rates are continuing to head higher.

New figures provided by the freight matching service provider DAT Solutions, based on its load boards, show the number of flatbed load posts fell 3% and truck posts declined 7% compared to a week earlier, causing the load-to-truck ratio to increase 5% to 14.4 loads per truck.

The national average flatbed rate increased 1 cent to $1.92 per mile. All reported rates include fuel surcharges.

Most major flatbed markets were down but one bucked that trend, Raleigh, North Carolina, where strong construction activity helped propel spot rates up 14 cents last week to an average of $2.54 per mile. The lane from Raleigh to Tampa has gained 35 cents in the past month to $2.55 per mile.

On the dry van side there is one surprise, according to DAT, the monthly average spot rate of $1.64 per mile in July is 2 cents higher than the average in June, when shippers typically have more demand for truckload capacity.

The number of van-load posts increased 6% last week while the van load-to-truck ratio rose slightly to 2.8 loads per truck on a 5% drop in the number of posted trucks. Regionally, markets with the highest average outbound rates showed little or no change compared to the previous week, but ranged from a low of $1.58 per mile in Dallas to a high of $2.12 in Los Angeles.

Meantime, the national average spot reefer rate fell another 3 cents to $1.93 per mile. That's below the June average but only by 4 cents. By comparison, last year's national reefer rate dropped 10 cents from June to July

The number of reefer load posts gained 13% last week while truck posts fell 5%, which led to an 18% jump in the reefer load-to-truck ratio to 5.1 loads per truck.

“The typical mid-July slump isn't as bad for some truckers as it was in previous years,” said DAT Analyst Peggy Dorf last week in a post of the company's blog. “A downturn in July is a normal seasonal trend on the spot market, but it's sometimes followed by a rebound in August and September. Reefers may get a pay raise then, too, when grocers stock up on fresh food for back-to-school season.”